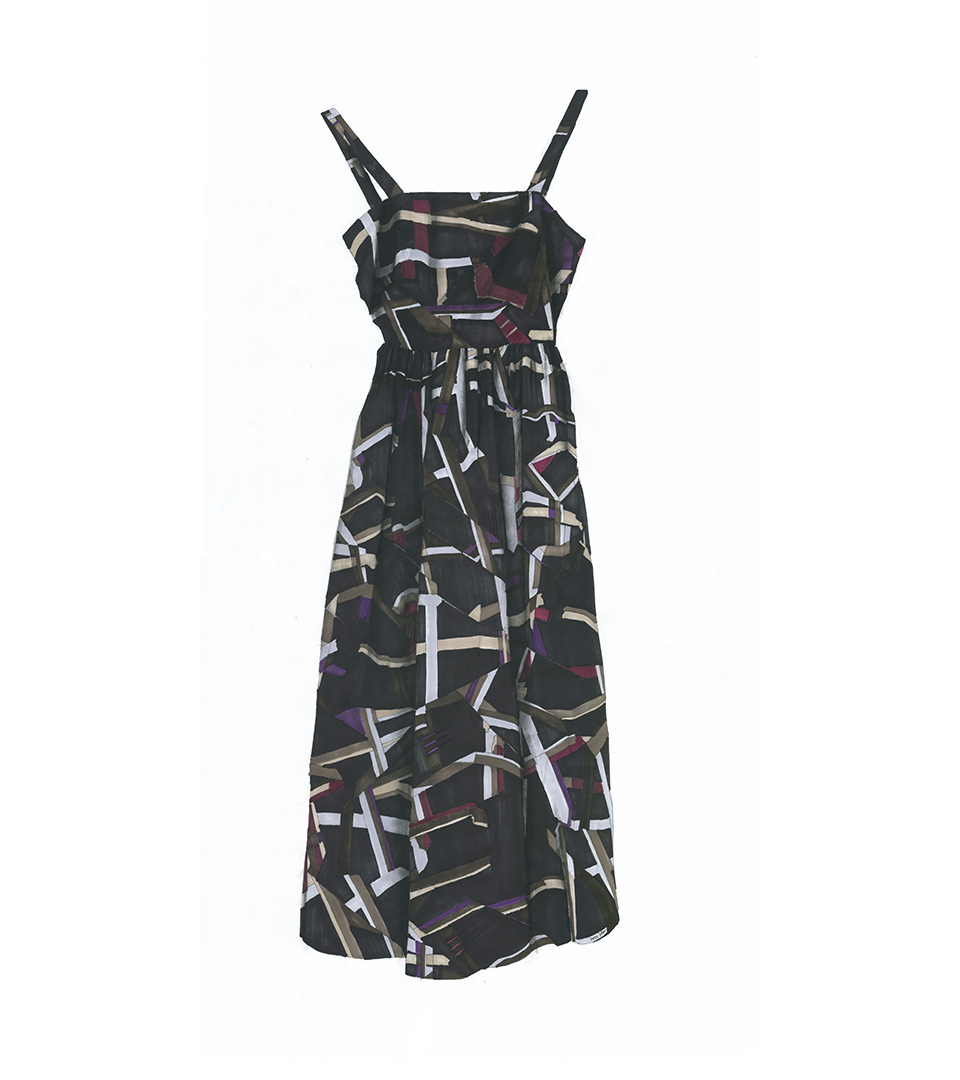 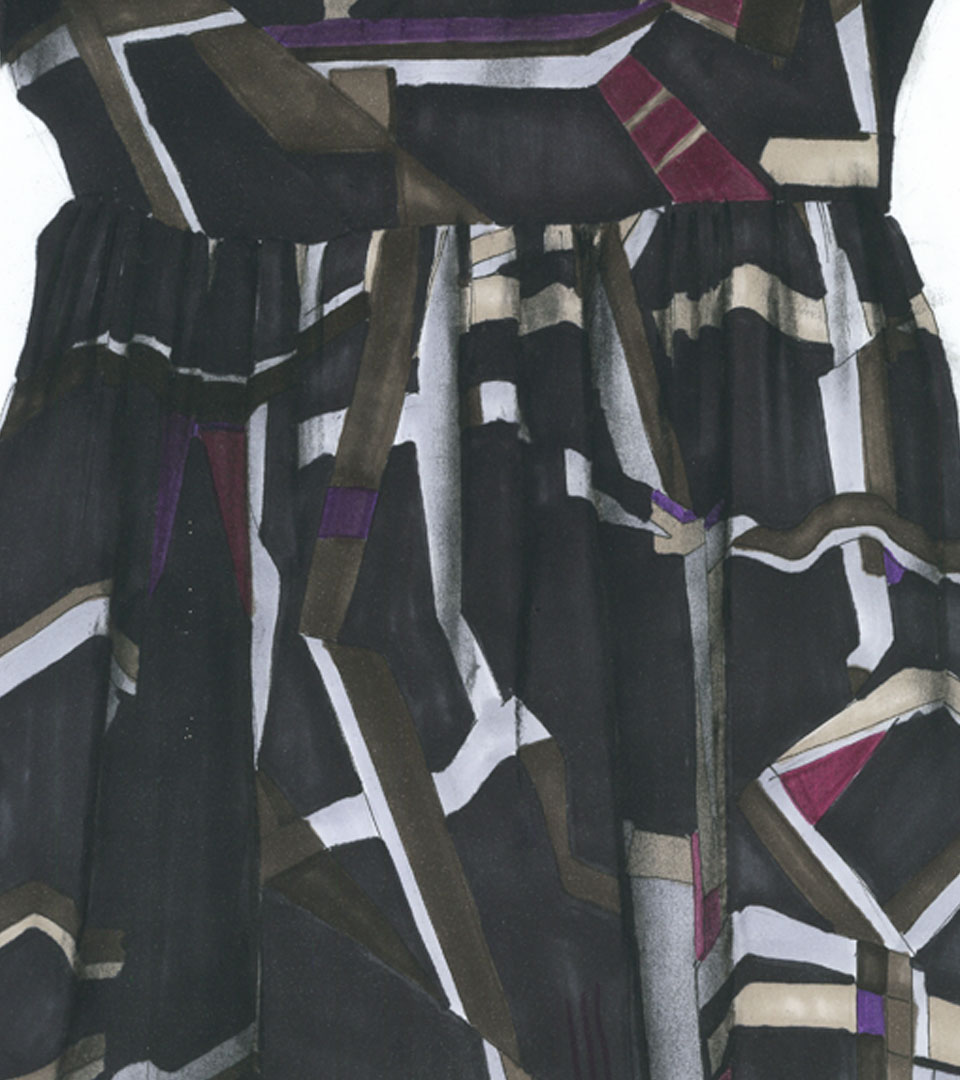 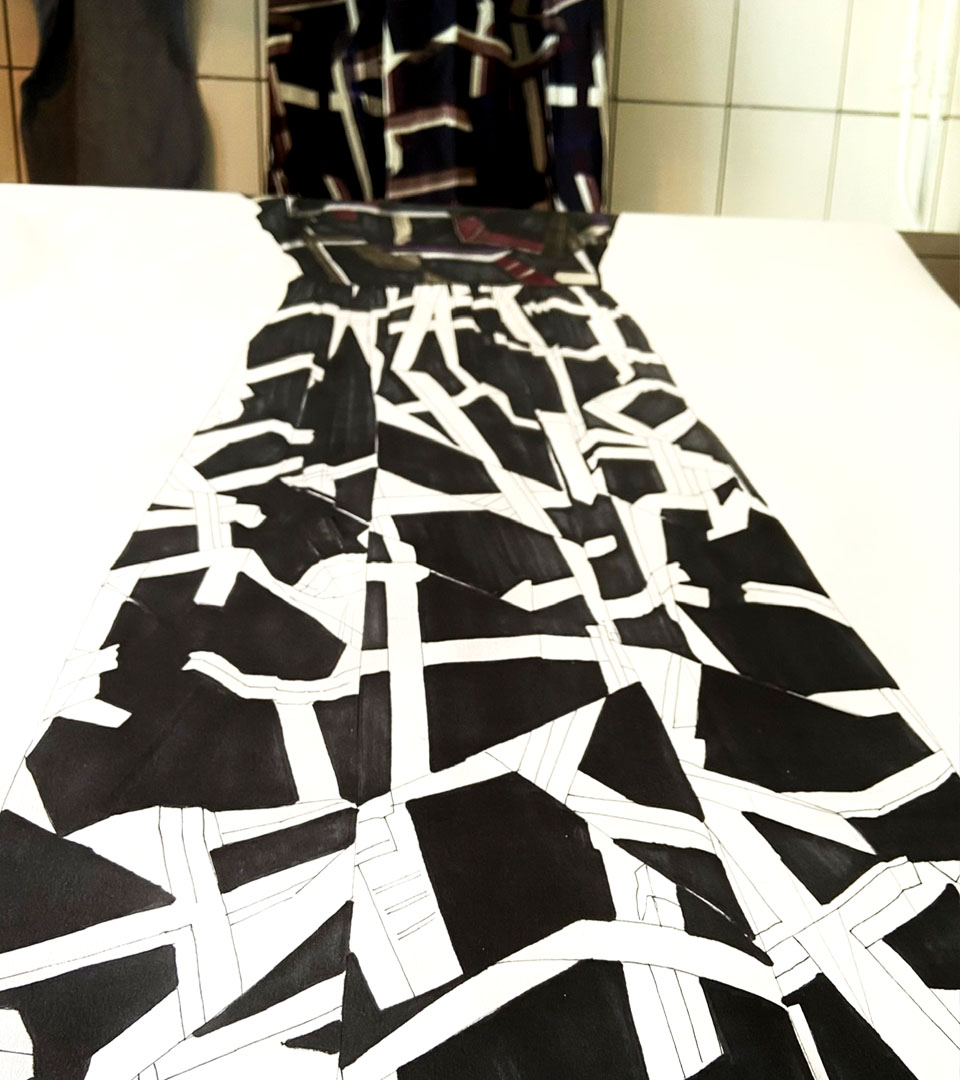 I am calling Nadin about her dress. She lives in Berlin and I know nothing about her save her phone number. And I know what her dress looks like and ask her to describe it. “It is a full length dress with two straps on top. It is a beautiful print in browns and blacks with hints of grey, purple and reddish lilac. The pattern has a certain stripy quality, but an interrupted stripe, which makes it collage like. There is a lot of movement in the print. It is like a painting, a canvas. The size of the dress strengthens that. On a smaller piece of clothing it wouldn’t work. It would be too much, too busy. But on the large expanse of cloth the boldness of the print has the room to really work. The fact that the fabric, cotton, is relatively stiff also enhances this feeling of a canvas.” I’m surprised. Where lots of people find it difficult to describe their clothing, mentioning colours that aren’t there, getting stuck in commercial lifestyle driven selling jargon, Nadin has just described her dress with 100% accuracy despite not having seen it for months. It’s not so much the literal accuracy but the way she puts the feeling of the print into words. I ask her if she is an artist. Sure enough, she is. “I bought it in a shop in Mitte around the corner. I was alone and really doubtful about buying it. Would I ever wear it? I mostly wear trousers and only have 2 or 3 dresses. And it is so strong, so out there. You stand out in it. The first time I wore it I got two compliments.” Nadin says the stiffness of the fabric makes her feel bigger and I who have a poor relationship with my large bottom think cripes that’s the last thing I’d want, a dress that would make me feel bigger. But she means bigger in a larger than life way. The dress has a grandeur, which makes her feel special, important. No it doesn’t resemble anything from her past that she is aware of. The shape and pattern remind her of the 80’s. I now know two things about her. She is an artist and she’s younger than I am. For me the fabric is 70’s, Africa in the 70’s. There’s a sort of 70’s sensual languor in the colours which contrasts with the vibrancy of the print. It’s Tony Allen after a long concert, spent and having a beer in a Kinshasa hotel garden. The 80’s, for me going through them as a teenager, were a pretty grim place of primaries, pastels and shapes with zero sensual languor. We talk about this and about being an artist in lockdown. She is upbeat; projects are slowly starting to take shape again. When we hang up I think about the artists uniform of dark jeans and old t-shirts. I look up her website. Of course! She works with textiles and with words. Beautiful, vibrant colours and people’s stories show up in the photographs. Artists choose the uniform to hide, not to draw any attention. The expression is in the work.