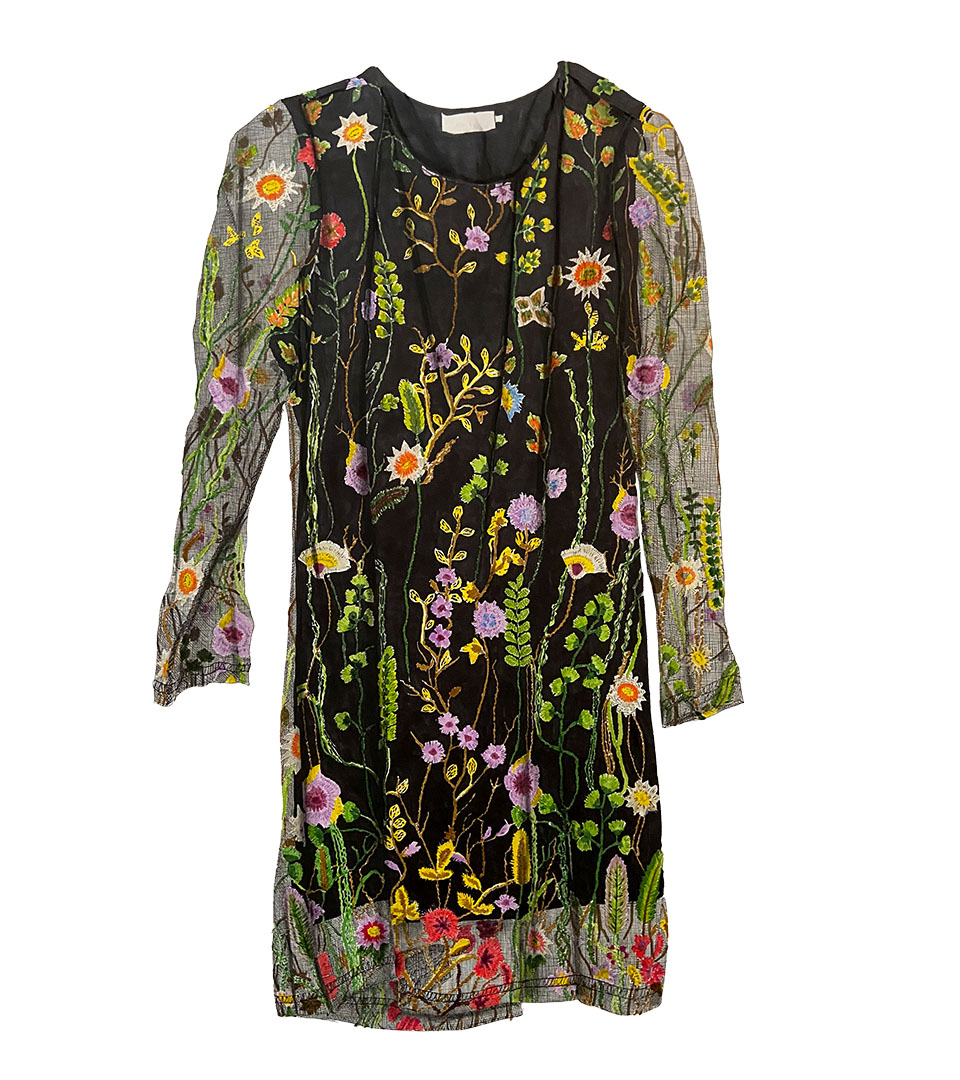 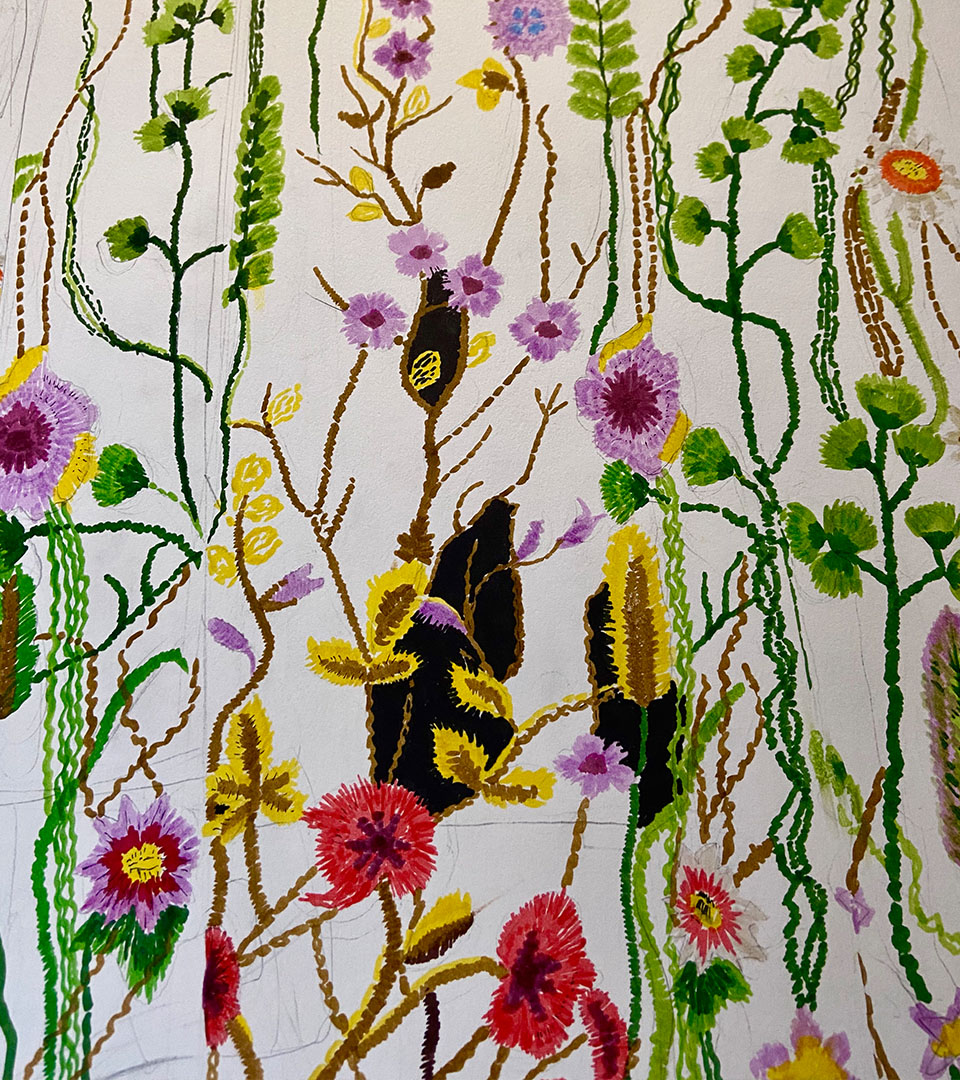 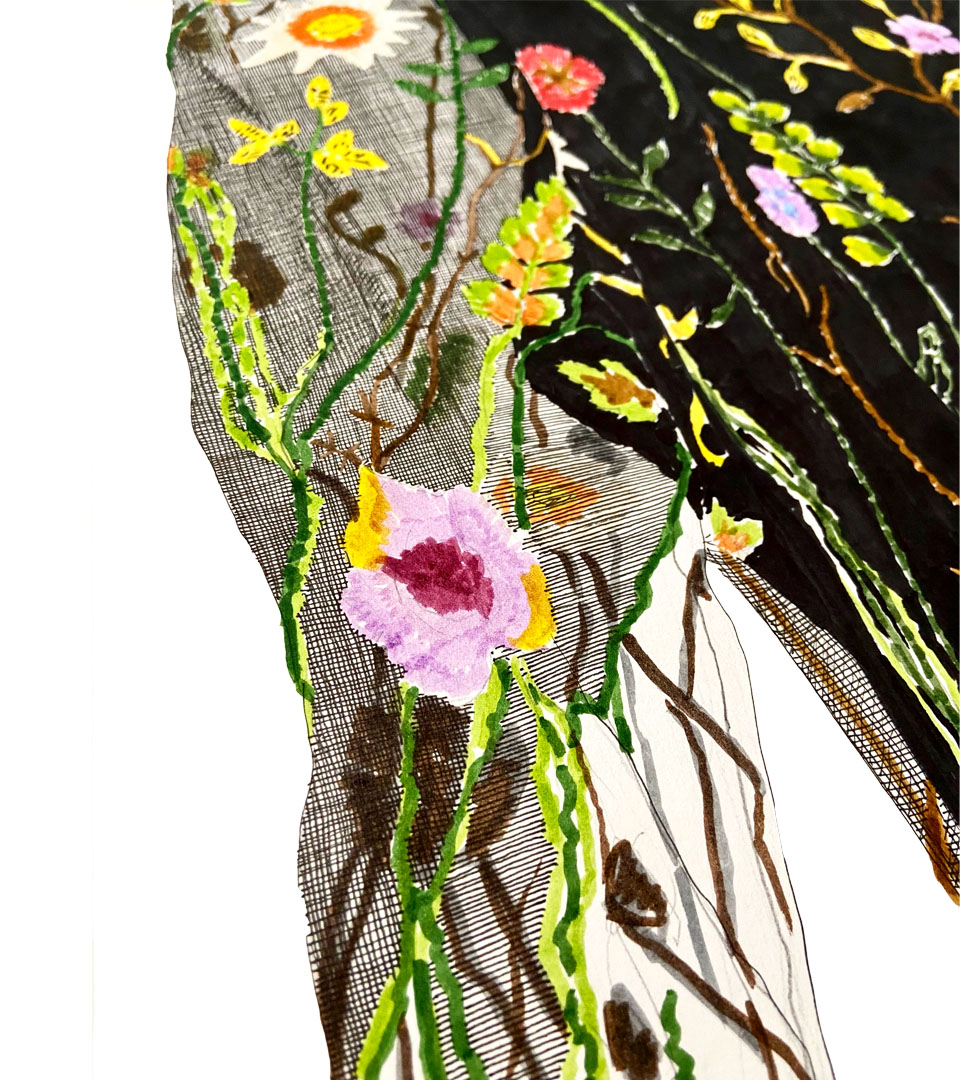 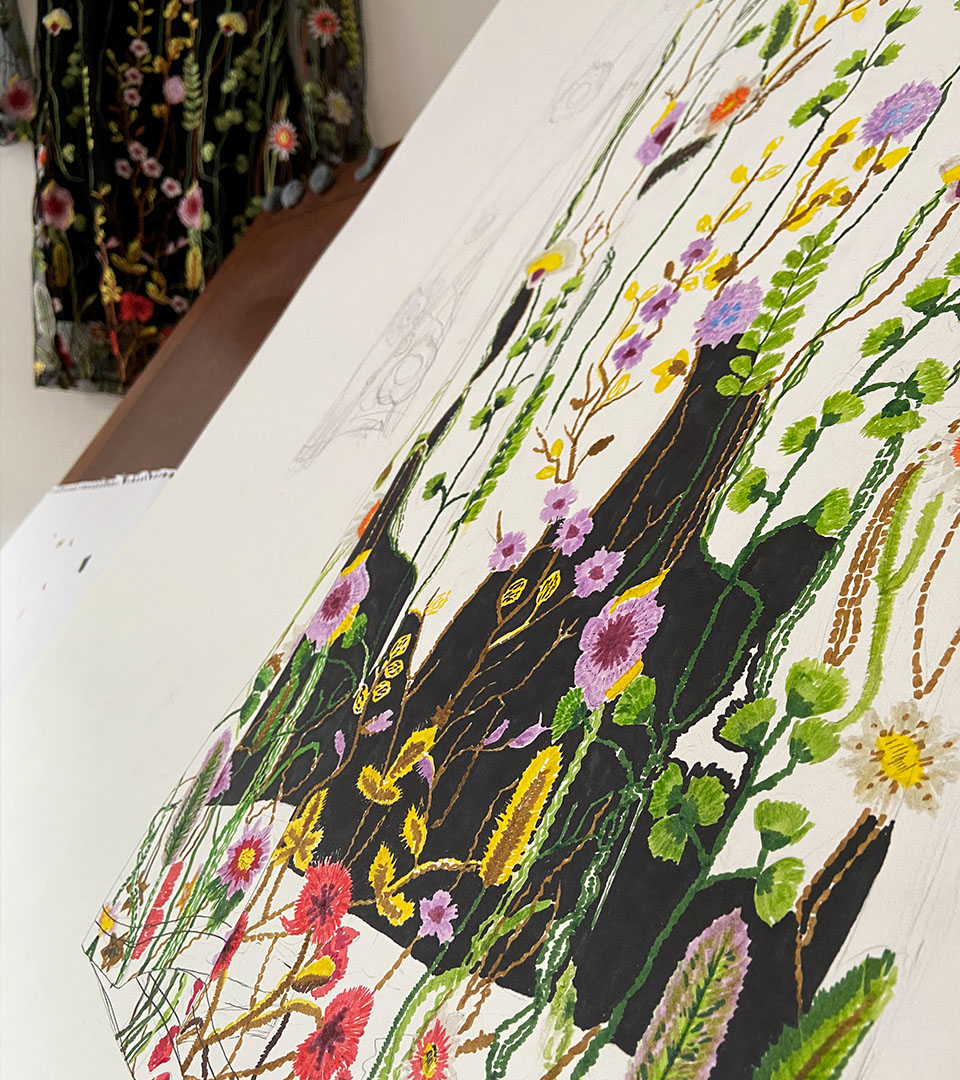 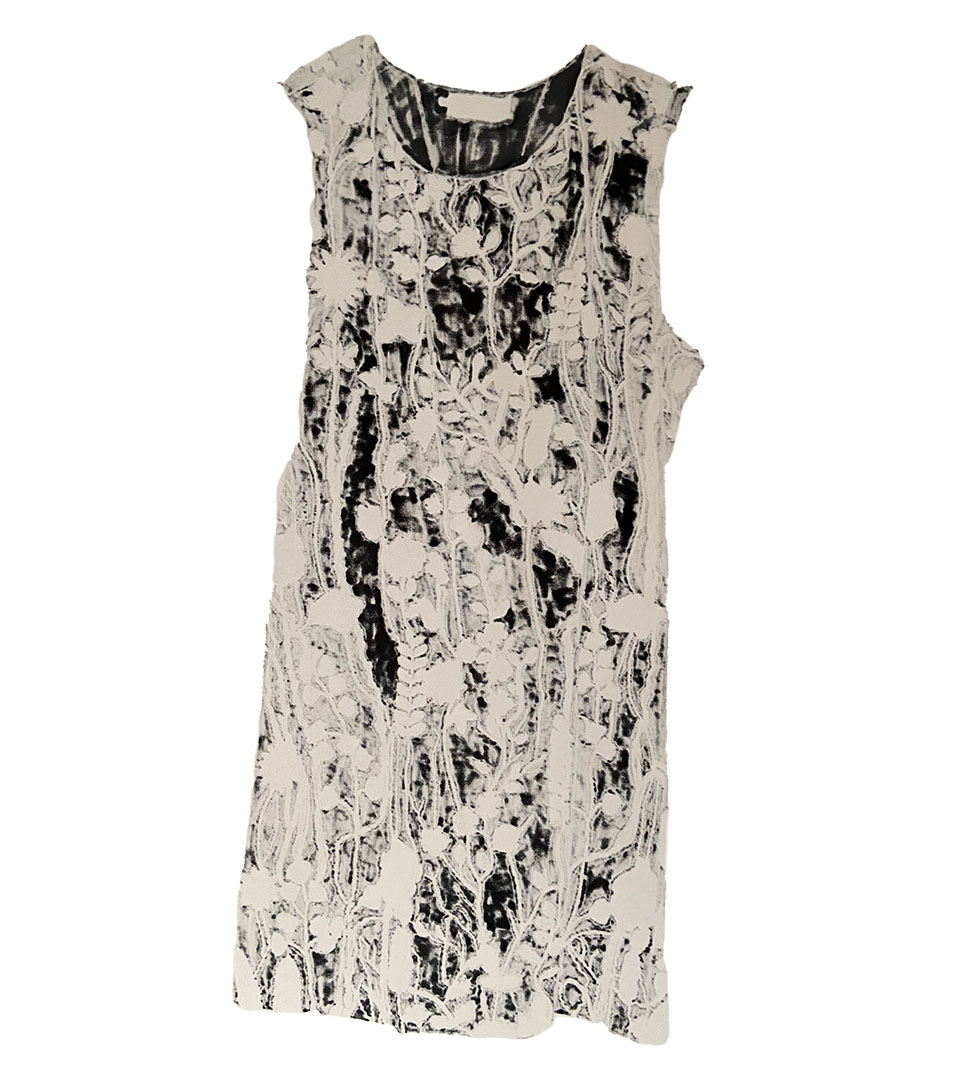 R: Hi Trish, let’s talk about your dress. Could you describe it?
Trish: It’s a short dress that’s mostly black but it’s got lots and lots of colourful flowers and it’s just a really, really pretty dress. It’s got a kind of net sleeves but the sleeves are also embroidered with the flowers and it ends above the knee but it’s really comfortable and easy to wear. I love it.
R. Would you call it a going out dress?
Trish: Yes it’s a going out dress. It would be my current favourite going out dress.
R: Do you remember buying it?
Trish: I only bought it recently, well …like I think I bought it maybe 18 months ago, which is recently for me. I bought it in my hometown, Bray, in a second hand shop, for a fiver. So I was delighted with myself. Because I spend most of my time in Dar I don’t spend that much time shopping anywhere. I possibly go into that second hand shop once, maybe twice a year. You always find something. I have lots of lovely second hand clothes but that’s probably the most special thing I’ve found. I try to buy second hand, not so much expensive vintage, but it’s more that I have become more mindful about waste. I don’t succeed all the time but if I can get away without buying new things I try. That’s changed. I wouldn’t have had any concept when I was young, wouldn’t have known about things you can do personally for the environment. It’s possibly in the last eight to ten years that I’ve kind of woken up to that a bit. I was sick myself for quite a while. I’ve had relapsed breast cancer, and that kind of changed my life in many ways with my diet and being more mindful about exercise and then I guess it was all part of that. Just looking around, looking at the world and trying to be maybe slightly more gentle with the world.
R: So you don’t shop a lot but you are obviously in need of a party dress. Do you remember particular occasions on which you’ve worn it?
Trish: I’ve worn it to loads of things. In Dar es Salaam (and this is possibly my favourite thing to do) we have this sailing race where we go from Dar up the North coast to Tanga. Then there’s always a big party the next night and I have some lovely photos of me wearing it to that. I’ve worn it speaking at conferences; I’ll wear it to concerts, on a night out with friends. I probably only wouldn’t wear it on the ward because it’s too short but then again I have no shame, so I might even as it’s so comfy and light.
R: What kind of shoes are you wearing with it? And do you wear pantyhose with it?
Trish: No pantyhose in Dar, in Ireland yes. I don’t have lots of shoes. Sometimes flip-flops, sometimes I might wear the one pair of vaguely nice shoes that I have. In fact I think when I wore it in Tanga I probably didn’t wear any shoes. I sent the dress ahead with one of my friends in the dingy and then swam to shore and put it on when I got there.
R: Does the dress remind you of anything? Perhaps something from the past?
Trish: Maybe it reminds me of a more carefree time, more girly I guess than…I suppose I have quite a responsible job so when I put it on I probably feel a bit freer.

We talk a bit about how long Trish keeps her clothes. It’s long. She laughs and tells me that today and as we are speaking she is actually wearing the first pair of jeans she bought at eighteen of age. That must be an astonishingly good pair of jeans. We talk about her coming home to support her family at a horrible time of loss and being stuck due to Corona. That it is somehow a relief to be able to stay and help her parents. How her wonderful, well-trained colleagues are keeping everything running smoothly so her absence from Dar is okay. But yes she misses Dar and longs to go back. I ask how her wardrobe is coping now that her stay is being extended well into Autumn and she tells me she is sea swimming a couple of times a week. Now there’s something we both do, but I tell her that for the rest I’m not quite as superhuman as she is to which she replies that she is usually running and trying to keep as many balls in the air as she can, and yes sometimes she drops a few but they bounce back again.

Dr. Trish Scanlan is an Irish paediatric oncologist who lives and works in Dar es Salaam. She has been developing the National Children’s Cancer Service in Tanzania since moving there in 2007. She is Executive Director of TLM Ireland, a charity which helps fund her work.